We have now completed two labs based on Boiling Point:

Now that we have completed those two labs, we are going to move on to other effects on boiling point:

Read this article on Boiling Point, take notes and answer the questions related to the effects that  pressure at different altitudes and  pressure during different weather systems has on the boiling point of water.

(Make sure to add this learning to the Boiling Point section of your ‘scrapbook’!)

Here is an article on Melting Point as well that will help you with this section of Properties of Matter.

Here are some things that will help you to study for the upcoming assessment:

Study Guide for the Matter and BP Summative

Interactive States of Matter and Boiling Point at Different Altitudes: 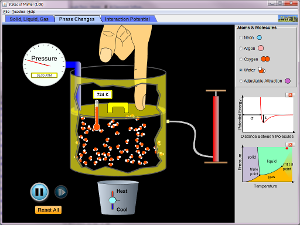 Lab Objective: To figure out if the boiling point of water depends on the sample size.

In your scrapbook you should discuss the following as your learning for the lab:

2. Take a screen shot of the class data and graph of the boiling points of different volumes and put it in your scrapbook.